People queued outside Paddington station ahead of the line opening at 06.30 on May 24. 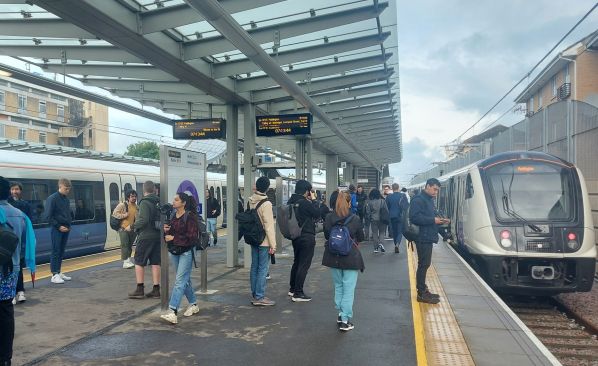 Passengers at Abbey Wood on May 24 at the southeastern end of the Elizabeth Line.

SERVICES on the 21km central section of London’s Elizabeth Line between Paddington and Abbey Wood began operating on May 24, with trains operating every five minutes from 06:30 until 23:00 Monday to Saturday.

People lined up outside Paddington and Abbey Road stations ahead of the launch, with staff managing the flow of passengers into the stations to avoid overcrowding on the first trains. Staff were also present at all nine stations to assist passengers.

All services between Reading and Heathrow to Paddington and from Shenfield to Liverpool Street, previously operating as TfL Rail, have been rebranded to the Elizabeth Line. Customers travelling between Reading or Heathrow into London will need to change at Paddington for services into the central section of the route, while customers from Shenfield into London will need to change at Liverpool Street. Services from Reading, Heathrow and Shenfield will connect with the central tunnels in autumn when frequencies will also be increased to 22 trains per hour in the peak between Paddington and Whitechapel.

Work will continue in engineering hours and on Sundays to allow a series of testing and software updates in preparation for more these more intensive services. Bond Street’s new Elizabeth Line station will also open to passengers later this year as work continues to complete the station.

Free Wi-Fi is available stations, which will allow TfL to collect depersonalised connection data to gain a better understanding of how customers move through stations.

Queen Elizabeth and Prince Edward visited Paddington Elizabeth Line station on May 17 to mark the completion of the new railway.

A £15.9bn funding envelope was agreed in October 2007 to deliver the Crossrail scheme in its entirety. Following the Comprehensive Spending Review in October 2010, a revised funding envelope of £14.8bn was agreed, with this increased to £17.6bn in 2018. A further £825m was provided in December 2020 and a total of £390m in July 2019 and July 2020, taking the total project cost to £18.8bn. The city of London has contributed nearly 70% of this, including 30% from London's farepayers and around 40% from London's businesses - combined with 30% from the government.

A number of proposals for an east-west underground line through London had been put forward since World War 2, but the first Crossrail scheme submitted to parliament in 1991 failed to pass the committee stage. However, the safeguarded route was used for the central section of a revised scheme recommended by the Strategic Rail Authority (SRA) London East West Study in 2000. A joint venture between the SRA and Transport for London (TfL) was set up in 2001 to promote the project, with an outline design, consultation and business case development being developed before a Crossrail Bill was submitted to parliament in February 2005. Scrutiny in parliament reinstated Woolwich station which had been dropped during development, with the Crossrail Act receiving Royal Assent in July 2008.

A development agreement between TfL and the Department for Transport as joint sponsors established Crossrail Limited and the formal start of construction for Crossrail was marked at Canary Wharf on May 15 2009.

The main construction phase was launched in 2011, with tunnelling beginning in May 2012 and completed in May 2015. Eight tunnel boring machines (TBM) were used to create the new tunnels under London with further works on stations, platform tunnels, shafts and portals continuing after TBM tunnelling finished.

Installation of railway systems such as track, power and signalling began once the tunnels were ready in 2015. Systems were also fitted into stations and other structures, then tested and commissioned as an overall system.

In 2015 TfL Rail services were introduced from Liverpool Street to Shenfield, operated by MTR Elizabeth Line. MTR is responsible for the provision of train drivers, station staff and control room operators and will continue to work alongside TfL colleagues to provide the service across the Elizabeth Line.

In 2016, Queen Elizabeth visited Bond Street station and the railway was renamed the Elizabeth Line, with the first of the new Elizabeth Line trains introduced on the eastern section between Liverpool Street and Shenfield the following year.

Extensive commissioning with trail running along the central section commenced in spring 2021, with trial operations starting in November 2021. Following the opening of the central section on May 24, full services across the entire route are set to be introduced by May 2023.

For detailed data on rail projects in England and around the world, subscribe to IRJ Pro.