FOLLOWING three years of construction, the Chinese city of Chengdu celebrated the opening of the 10.9km metro Line 10 on September 6. 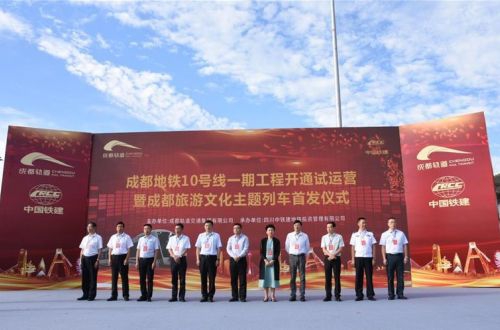 The line utilises a fleet of six-car 100km/h Type A trains, which will operate at eight-minute intervals during the peak and serve passengers between 06.00 and 23.00 every day.

As well as conventional two-dimensional barcode tickets, passengers using the line will have access to mobile ticketing, which will also be rolled out across the network’s 60 stations by the end of the year.

Chengdu Metro says work is ahead of schedule on the second phase of Line 10, the 27km, 10-station extension to Xinping. The extended line is scheduled to enter service in December 2020.

In addition, at the end of August Chengdu Metro Corporation introduced a metro food map highlighting culinary highlights close to stations across the city’s metro network. It is hoped the initiative will attract an extra 60,000 passengers to use the metro every month.