CHENNAI became the seventh Indian city to launch a metro network on June 29, when the chief minister of Tamil Nadu Dr Selvi Jayalalithaa inaugurated the 9km elevated section of Line 2 from Koyambedu to Alandur. 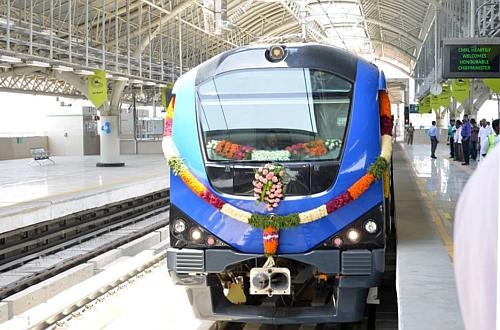 Alstom is supplying a fleet of 42 four-car Metropolis trains for Phase 1 under a €243m contract awarded in 2010. The first nine of the stainless steel-bodied trains were assembled at Alstom's Lapa facility in Brazil before production shifted to the company's Sricity plant in the Indian state of Andhra Pradesh. Each train will accommodate up to 1200 passengers.

Nine of the trains are being used to operate a 10-minute interval service on the initial section of Line 2 between Koyambedu and Alandur between 0500 and 2300.

Japan International Cooperation Agency (Jica) provided 59% of the funding for the Rs 140bn ($US 2.23bn) first phase of the network, with the state and national governments funding the remainder.