CHENNAI marked the opening of the first underground section of its metro network on May 14, when Tamil Nadu chief minister Mr Edappadi Palaniswami and India’s minister of urban development Mr Venkaiah Naidu inaugurated the 7.4km stretch of the Green Line between Koyambedu and Nehru Park. 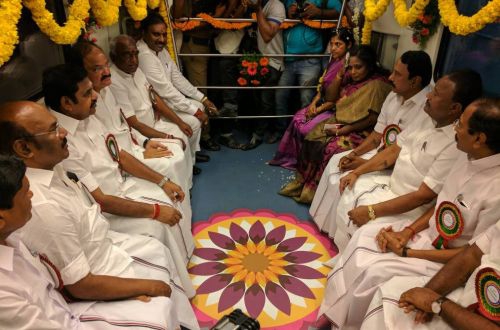 Stations are equipped with platform screen doors and services are operated by a fleet of Alstom trains.

The initial 10.2km section of the Green Line from Alandur to Koyambedu was inaugurated in June 2015 and the 1.2km southern section from Alandur to St Thomas Mount was added in September 2016. The final 2.7km section to Eggmore and Central Station is due to open next year.

The opening of the latest section of the Green Line takes Chennai’s metro network to 27.9km, with 17.1km of the first phase still to be completed.

Speaking at the opening ceremony, Naidu said the Indian government is poised to approve the second phase of the network. “We’ll sanction consent as soon as possible and send the same to the Finance Ministry and Public Investment Board,” he said.