The 56km line is the longest in Hong Kong. 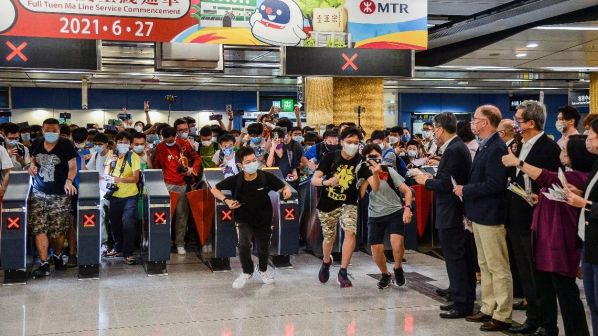 PASSENGER services on Hong Kong’s full Tuen Ma Line (TML) began on June 27 following the opening of the final 4.2km section, linking the east and west of the New Territories and east Kowloon. The full 56km line is the longest in the city, with 27 stations including six interchanges with existing lines.

The opening at Sung Wong Toi station was attended by the chairman of MTR, Dr Rex Auyeung, and MTR CEO, Dr Jacob Kam, along with other executives. The TML project unifies the existing Western Rail and Ma On Shan lines into a single line. A special service to mark the opening departed Sung Wong Toi station at 05.50, with MTR also presenting limited edition face masks and travel card holders to mark the occasion. MTR also provided 100,000 free journeys for MTR Mobile users.

The completion of the 4.2km phase 2 follows the opening of the 6.8km TML Phase 1 in February 2020, which extended the Ma On Sha line from Tai Wai to Kai Tak.

“MTR strives to keep Hong Kong moving to facilitate the city’s development and satisfy citizens’ commuting needs,” Auyeung says. “Linking the east and west of the New Territories, the TML is a strategic railway line that connects to several existing railway lines and strengthens connectivity with the rest of the Hong Kong railway network. Passengers can now enjoy more interchange alternatives than ever before.

“The successful service commencement of the TML is a result of the kind understanding of residents living along the TML during the construction phases and the dedication of MTR projects and operations staff,” Kam says. “I want to express my profound gratitude to the residents for their immense support, and to fellow MTR colleagues, contractors and relevant government departments for their collective effort.”

MTR earlier this month signed an agreement with the Hong Kong government and the Kowloon-Canton Railway Corporation (KCRC) to operate the TML under a two-year concession from the start of services.