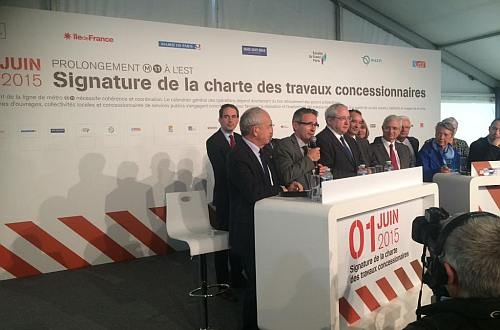 The 5.4km extension will include six stations serving the districts of Les Lilas, Romainville, Noisy-le-Sec, Montreuil, and Rosny-sous-Bois, where a new depot will be constructed.

The €1.3bn project is being funded by the regional government of Ile-de-France, the French state, Société du Grand Paris, the department of Seine-Saint-Denis, the City of Paris, and RATP.

Rolling stock will be funded by RATP and Ile-de-France Transport Authority (Stif) at a cost of around €150m and services will be operated by an entirely new fleet of five-car trains running at minimum headways of 1min 45sec. Nine other stations on Line 11 will be upgraded to accommodate 10-car trains, as the maximum train length at present is eight cars.

The extension is scheduled to open in 2022 and is part of a broader programme of urban rail enhancements in the northeast of Paris, which also includes the modernisation of RER Line B, the extension of light rail lines T1, T3b and T4, and Grand Paris express metro Line 15.

A public inquiry is due to take place next year into a further four-station extension from Rosny-sous-Bois to Noisy-Champs, which is due to be completed in 2025.