TRANSPORT for London (TfL) published its response to last year’s consultation on proposals to extend the Bakerloo line beyond Elephant & Castle on September 12, and said the comments are being included in revised plans which will be subject to a more detailed public consultation in 2019. 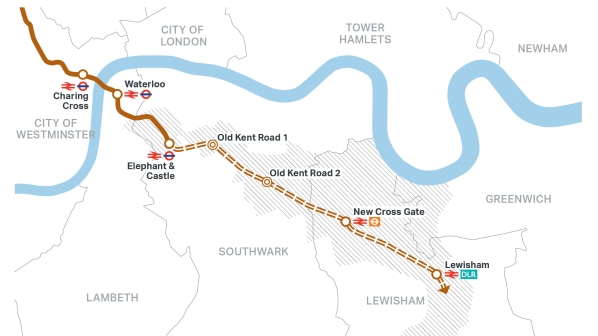 The proposed line, which will go out for detailed public consultation in 2019.

More than 4800 responses were received in the consultation held in early 2017, which sought feedback on proposals for stations at Elephant & Castle, New Cross Gate, Lewisham and two entirely new stations along Old Kent Road.

Plans are being developed that would see the Bakerloo line station and ticket hall at Elephant & Castle station moved and integrated with the planned new Northern Line ticket hall.  This would provide passengers with an easier interchange with both Northern line and Thameslink services and help reduce crowding at peak times.

Journey times between Lambeth North station and the proposed ‘station 1’ on the Old Kent Road could also be reduced based on current plans due to a shorter tunnel alignment via the new Elephant & Castle Bakerloo line station.

Changes to the plans at Bricklayers Arms Roundabout have removed the need for a ventilation shaft between Elephant & Castle and the Old Kent Road stations due to the shorter tunnel alignment.

While a new station at the Bricklayers Arms was considered following comments from the consultation, TfL says it will not be progressed due to its close proximity to the existing Elephant & Castle and Borough Tube stations and the location TfL is focusing on for the proposed new ‘station 1’ on the Old Kent Road. The proposal for an additional station would also considerably increase the overall cost of the extension and increase journey times.

The site of the proposed station at New Cross Gate continues to be evaluated, including ways the station construction could be delivered effectively with minimal local impact. The new station will be planned to manage customer flows to provide an easy and efficient interchange with London Overground and main line rail services.

Designs for the potential new layout at Lewisham station are being developed to provide an interchange for customers between the Bakerloo line, DLR and main line rail services.

“We have taken on board the views of almost 5,000 people and will now refine the proposals and carry out a further public consultation next year,” TfL’s director of city planning, Mr Alex Williams. “This will help us shape our plans for the first phase of the extension to Lewisham which is planned to be completed by 2029.”

The line will provide capacity for 65,000 passengers in the morning and evening peak, relieving congestion on local bus and main line rail services.