Conversion of Hook of Holland line to metro starts 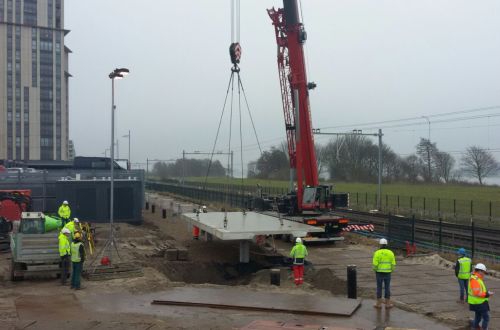 The work involves renovating the seven existing stations, raising the height of platforms to make them level with train entrances, and making the stations accessible to disabled passengers by installing lifts and guideways for the blind. Two new stations will be built at Maassluis Steendijkpolder and Hook of Holland Beach. The latter will replace the existing station and will require a 900m extension to the line, which will be completed in 2019. A temporary station will be provided in the meantime.

A temporary station will also be provided at Schiedam Nieuwland until early 2018. as reconstruction of the existing station is too big a job to be completed in five months.

The overhead electrification will be converted from 1.5kV dc to 750V dc and two movable bridges on the line will be electrified. Diesel-hauled freight trains will continue to operate on part of the line during off-peak periods by installing staggered rails in the centre of the double-track sections through stations.

Infrastructure works are expected to be completed by the end of June, to allow commissioning to take place in July and test running in August.

Metro services will begin on September 1. Trains will run through from Hook of Holland via the centre of Rotterdam to Nesselande in the east with a 10-minute frequency provided between as far as Maassluis Steendijkpolder. RET expects a 40% increase in passenger traffic as a result of converting the line to metro operation.

A new station is proposed near the Maeslantkering, the giant Port of Rotterdam sea defence gates.