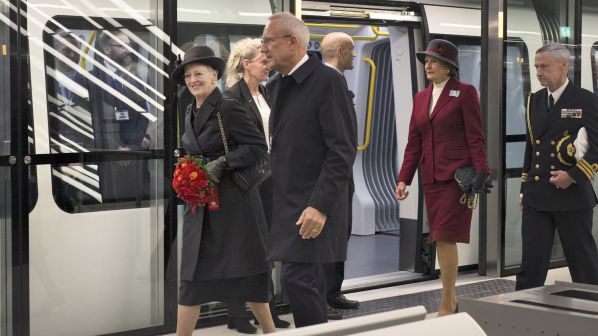 Queen Margrethe II at the inauguration of the Cityring metro line in Copenhagen.

The Queen was joined by Danish prime minister, Mr Mette Frederiksen, and Copenhagen mayor Mr Frank Jensen for the inaugural journey. Passengers were subsequently invited to enjoy free rides on the new line from the conclusion of the ceremony at 15.00 until midnight.

The 17km line includes a 15.5km underground section and connects with the city’s three existing metro lines as well as the S-Train commuter network. The complete journey around the ring takes 24 minutes while the 17 new stations connect Vesterbro, Frederiksberg, Nørrebro, and Østerbro with the inner city.

The inauguration marks the completion of a construction project that began eight years ago with civil works carried out by the Copenhagen Metro Team consortium of Salini-Impreglio, Seli, and Tecnimont under a €1.6bn contract. Hitachi Rail STS (formerly Ansaldo STS) delivered the €700m systems contract which included design, supply and installation of track, power and communications, Scada, platform screen doors, communications-based train control (CBTC) and a fleet of 28, 39m-long three-car driverless trains, as well as the control and maintenance centre. Hitachi Rail STS will also maintain the system for five years.

The Cityring has an average depth of 30m below street level, and is forecast to transport up to 72 million passengers a year, taking the metro’s total annual ridership to 122 million passengers. Services will operate 24 hours a day with headways of between 80 and 100 seconds. Following the opening of the line, 85% of Copenhagen’s residents will live within 600m of a metro or railway station.

A 3km extension of the Cityring to the Nordhavn reclamation will open next year, adding a further two stations and 2km of underground line and a 1km elevated section. The 4.4km Sydhavn underground branch project will add a further five stations when it opens in 2024.

For up-to-date information on metro projects from around the world, subscribe to IRJ Pro.