THE final section of 42km of bored tunnels for London's Crossrail project has been completed allowing fitting out to commence. The £14.8bn project is now 65% complete, within budget, and on target to open in 2018. 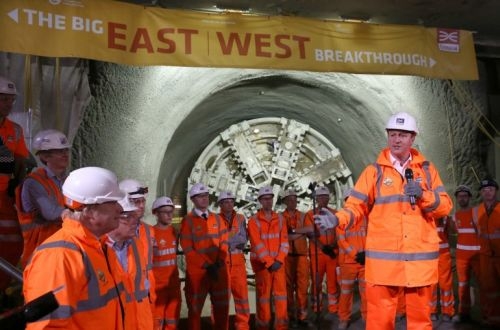 Britain's prime minister Mr David Cameron and the mayor of London Mr Boris Johnson celebrated the event on June 4 with tunnelling workers 40m below ground at Farringdon. "Crossrail is an incredible feat of engineering that will help to improve the lives of working people in London and beyond," said Cameron.

"This is a landmark moment for London that puts us a gigantic step closer to the launch of an absolutely vital new railway, which will hugely improve our ability to speedily move people across our city," Johnson added. "Crossrail is a wonderful example of our nation's talent for engineering, a talent that must not be allowed to founder and that I hope will eventually be put to use on the construction of Crossrail 2."

Construction of Crossrail started in 2009 and tunnelling began in mid-2012. The final tunnel boring machine (TBM), named after Queen Victoria, broke through into Farringdon station on May 23 and completed tunnelling on May 26.

Six TBMs have been used to drive five twin-bore tunnel sections at depths of up to 42m. Each bore is 6.2m in diameter between stations. In addition, two mix-shield slurry machines were used to tunnel through the wet chalk and flint beneath the River Thames. TBM Ellie holds the record for tunnelling the furthest in a single day by boring 72m compared with the average rate of 38m/day.

There will be 10 new stations in central London, Docklands and Woolwich, only one of which at Custom House is on the surface, where Crossrail takes over a disused railway.

Crossrail will connect with existing lines at Paddington in the west and Stratford in the east so that trains can run through to Heathrow Airport, Reading and Shenfield serving a total of 40 stations. MTR, which won the concession to operate Crossrail, took over responsibility for Liverpool Street – Stratford – Shenfield services on May 31.

Crossrail is designed to increase railway capacity in London by 10% and will be used by an estimated 200 million passengers a year.