MORE than 7100 passengers took part in six hours of complimentary trial operations on Dalian metro Line 2 on April 30, with 11 trains carrying out more than 100 pilot runs. 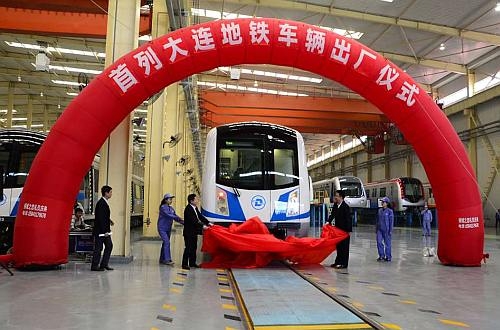 CNR unveiled the first train for Dalian Metro in April 2014.

The 20.6km line runs from Haizhiyun in the east of the Chinese city to Dalian Zhoushuzi International Airport in the northwest. Trials with around 5,000 daily passengers are continuing until May 8 when it will be ramped up to 10,000 passengers until May 17 when the line is due to open.

The line is served by a fleet of 120m-long six car type-B metro trains supplied by CNR. The trains reached a maximum speed of 70km/h during the trials and an average speed of 30.7km/h following 30-second stops at 17 of the line's 19 planned stations.

Line 2 will eventually be extended by 16km and another 9 stations from the airport to Dalian North Railway Station, which will take its total length to 42.6km.