LESS than 16 years after the opening of its first line, the Delhi metro network passed the 300km mark on October 31 with the inauguration of the 17.8km eastern section of the orbital Pink Line (Line 7) from Shiv Vihar to Trilokpuri Sanjay Lake. 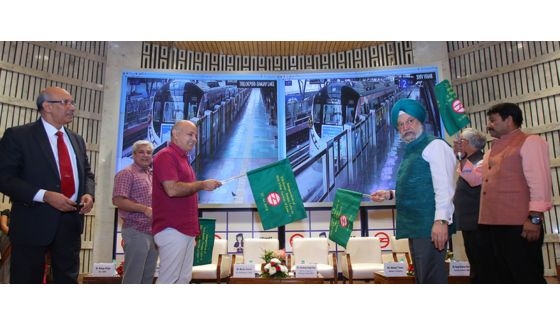 The 15-station section includes interchanges with the Red Line at Welcome and the Blue Line at Karkardooma and Anand Vihar.

Sharp curvature was required to thread the line through the densely-populated area it serves, and the minimum curve radius on the new section is just 200m. Previously the sharpest curve was on the Okhla - Jamia section of the Magenta line, where the minimum radius is 242m.

The line also had to cross one of the busiest sections of the Indian Railways (IR) network at Anand Vihar. Two viaduct piers were erected on the main line platforms without disrupting traffic and cellular lightweight concrete (CLC) construction was employed to enable a maximum bridge span of 69.8m across the railway.

The line includes an 18.2-hectare depot at Vinod Nagar, which has 20 covered and 12 open stabling sidings. Solar panels on the depot roof will generate 1.1MW of electricity for use on the site.

The opening of this stretch takes the total length of the network to 314km with 229 stations. Delhi Metro Rail Corporation (DMRC) says it has opened 80km of new lines so far this year and it expects to open the remaining 33.5km of the 123.8km Phase 3 expansion by the end of next month.