DHAKA Mass Transit Company (DMTCL) has awarded a $US 500m lump-sum contract to a joint venture of Marubeni, Japan, and Larsen & Toubro, India for the electro-mechanical contract for Line 6, which is the first metro line to be built in the Bangladesh capital. 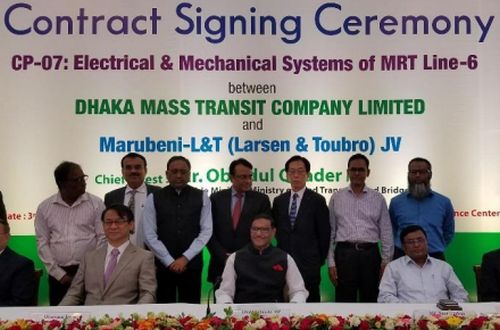 The line will be electrified at 1.5kV dc overhead. Larsen & Toubro’s Power Transmission & Distribution division will install 132kV GIS-based receiving substations, associated EHV cables to connect with grid substations, auxiliary substations at the stations and the depot, a 33kV cable network along the line, and a power supply Scada system.

Marubeni will be responsible for the signalling which will include a communications-based train control (CBTC) system with an LTE-based telecommunications and radio system.

Kawasaki Heavy Industries (KHI) and Mitsubishi were awarded a Yen 40bn ($US 360m) contract in 2017 for 24 six-car metro trains, together with depot equipment.

Construction of Line 6 began in August 2017 and is expected to take three years to complete.

The metro project is being funded by the Japan International Cooperation Agency (Jica) through aid from Japan to Bangladesh.