IRELAND's minister for transport tourism and sport Mr Paschal Donohoe announced on September 28 that the government has revived plans for a metro line between Dublin City Centre, Dublin Airport, and Swords as part of its €27bn capital plan for 2016-2021, although it will be more than a decade before the project is completed. 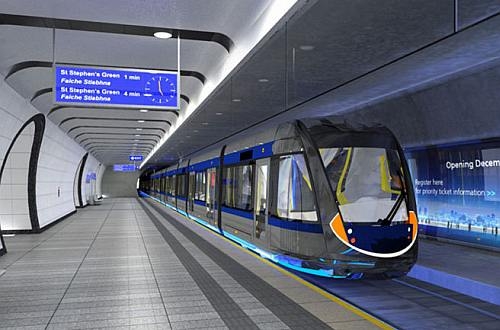 Plans for Metro North, together with the Dart Underground city centre commuter rail link, were shelved in November 2011 as the government sought to reign in public spending in the wake of a €100bn bailout by the International Monetary Fund.

However, under the new capital plan, Donohoe says the Department of Transport, Tourism and Sport will be allocated nearly €10bn between 2016 and 2022 to "restore transport investment to comparable international levels by 2020."

"This plan is the result of work carried out by my own department and the National Transport Authority (NTA), who have carefully considered Ireland's transport needs now and into the future," Donohoe says. "The transport element of the capital plan is framed by the recommendations set out in the Strategic Investment Framework for Land Transport, which has been published by my department."

Funding is allocated for Metro North, together with the expansion of the Dublin's Dart commuter rail network over the final three years of the plan.

The specification for Metro North has been revised significantly to bring the total cost down to an estimated €2.4bn (excluding VAT). This will be achieved with reduced tunnelling; replacing an elevated section in Swords with surface running; reducing the number of city centre stations by replacing O'Connell Bridge and Parnell Square with a single station at O'Connell Street; and smaller stations with shorter platforms and reduced train lengths.

The changes mean that 8.5km of the 16.5km line will be in tunnel, with trains running underground from St Stephens Green to Griffith Avenue in the city centre and beneath the airport. Metro North will provide a 19-minute journey time between O'Connell Street and the airport and 31 minutes from O'Connell Street to the northern terminus at Swords Estuary. Construction will not begin until 2021 and the 14-station line is not expected to open until 2026 or 2027.

Donohoe says the revised plan "retains a large proportion of the value of the almost €170m invested in the Metro North project" to date and is deemed to be the most economically viable specification with the best cost:benefit ratio of all the options considered. However, a new Railway Order will be required, replacing the planning permission granted for the project in 2010.

In addition to Metro North, the capital plan will fund the first phase of a multi-phase expansion of the Dart network, with the extension of electric commuter services north from Malahide to Balbriggan, west from Connolly to Maynooth, and southwest from Heuston to Hazelhatch.

In addition to these projects, the capital plan also includes funding to complete Irish Rail's Dublin City Centre Resignalling Programme; the construction of a new centralised traffic control centre for the inter-city and commuter networks; and ongoing maintenance of the national mainline network.

"We will not be in a position to deliver all of this immediately, we simply do not have the resources to do this now" Donohoe says. "What the government's capital plan does however is set out an investment plan that will ensure Ireland's transport network is fit for purpose and can adequately meet the needs of a growing economy."