The underground Buca line will be 13.3km long. 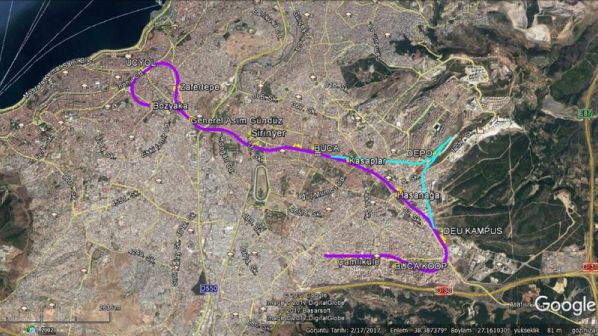 THE European Bank for Reconstruction and Development (EBRD) has announced it will provide a €125m loan to support the construction of the Buca metro line, the second in Izmir, Turkey’s third-largest city.

The €648m Phase 1 of the Buca underground metro line will be 13.3km long, including a 3.8km loop at the northern end, with 11 stations. The project cost includes €497m for civil works and €151m for engineering and maintenance.

Izmir’s metro system currently consists of a 20km line from Fahrettin Altay to Evka-3 with 17 stations, which opened in 2000 and was extended to its current length in 2012 and 2014. Services are provided by 182 light metro vehicles consisting of 19 five-car sets supplied by CRRC in 2017, and the original AdTranz trains which operate in two to five car configurations. The network carries 240,000 passengers a day. A 7km southern extension from Fahrettin Altay to Kaymakamlik with seven underground stations is currently under construction. The line is powered with 750V dc third rail electrification.

The stations and tunnel for the Buca line will be constructed between 30m and 45m underground, with stations at Bozyaka, Ucyol, Zafertepe, General Asım Gündüz, Şirinyer, Buca Municipality, Kasaplar, Hasanağa Bahçesi, Dokuz Eylül University, Buca Koop, and Çamlıkule. The line will interchange with Line 1 at Üçyol Station and the Izban rapid rail network at Şirinyer Station. The line will operate with attended ATO, and will be connected to a depot via two 3km tunnels.

The works contract is expected to be awarded in the second half of 2021, although a completion date for the project has not been given.

A planned Phase 2 will see the southern section of the line extended to reconnect with the Izban line at Inkilap Station, while Phase 3 will extend the line north to connect with existing Izban and metro stations. The total line will be 24.8km long with 22 stations.

“Our project will radically solve the traffic problem of Buca, the most congested district of our city,” says Izmir mayor, Mr Tunc Soyer. “The new metro line will connect with other urban transport links, promote modern, fast, eco-friendly and safe commute, create employment and attract investors.”

Enhancing the rail network is part of an action plan developed by the municipality together with the EBRD as part of the bank’s Green Cities programme which Izmir joined in 2018. The EBRD has provided €159m in loans for the city to date, including an €80m loan and a €25m B-loan to co-finance the construction of the 7.2km Fahrettin Altay - Narlidere - Kaymakamlik extension to Line 1, €23.5m to purchase 85 new metro vehicles, and a €33m loan for five new car ferries.