THE European Investment Bank (EIB) has announced a €650m investment in the construction of Kanpur’s first metro project, which will improve transport options for around three million residents in the Indian city. 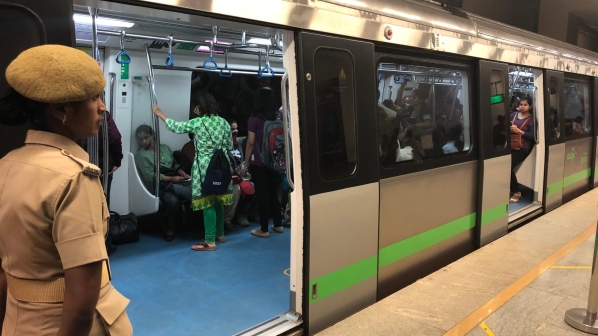 The investment will finance the acquisition of rolling stock and the development of two metro rail corridors totalling 32.4km with 31 stations, of which 19.4km will be elevated with 19 stations and 13km will be underground with 12 stations. The project has a total cost of €1.354bn.

Corridor 1 will run from IIT Kanpur to Naubasta while Corridor 2 will run from Agricultural University to Barra 8, with the two lines intersecting. Uttar Pradesh Metro Rail Corporation (UPMRC) announced in July it had completed more than half of the piling work along the initial 9km priority section of the Kanpur Metro Line 1, which is under constriction between IIT to Moti Jheel. In July, Bombardier was awarded a Rupees 20.5bn ($US 274.8m) contract to supply 67 three-car metro trains, plus CBTC signalling and control systems, for the Kanpur and Agra metro projects.

The new metro system will reduce commuting hours and unlock new employment and education opportunities in Kanpur, the industrial capital of the Uttar Pradesh region, while improving safety for women. This is the second metro rail project supported by the EIB in Uttar Pradesh, following a €450m investment in the development of a metro rail system in Lucknow.

With the Kanpur investment, the EIB has approved €2.65bn in funding for metro systems in India, more than half of the entire EIB’s Indian investment portfolio.

“Kanpur is the fifth metro rail project to receive EIB funds in India and is the biggest investment made by the bank outside the European Union,” says Mr Andrew McDowell, vice-president of the EIB. “The metro will have a positive impact on quality of life and doing business in the city through access to affordable transport, creating new employment and education opportunities. It will be a safe, green and affordable transport alternative for Kanpur and its visitors. We are also glad to see this project is contributing to global climate action while strengthening EU-India relations.”

“At the last summit on July 15, the EU and India discussed how to put climate action and the green transition at the heart of our economic recovery post Covid-19,” says Mr Ugo Astuto, EU ambassador to India. “Sustainable mobility is a key component of this strategy, towards modern, clean and healthy economies. The Kanpur project is an important investment in making public transport efficient, safe and sustainable.”