THE Prime Minister of Denmark Mr Lars Løkke Rasmussen and the mayor of Copenhagen Mr Frank Jensen witnessed the completion of tunnelling on the Cityringen orbital metro line on the morning of February 20, when TBM Tria broke through at the east end of the Copenhagen Central station box. 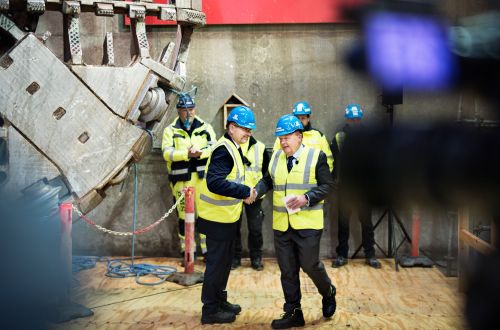 It has taken nearly four years for four TBMs to excavate and line the 15.5km twin-bore tunnels.

The DKr 22.2bn ($US 3.4bn) Cityringen is due to open in July 2019, linking Copenhagen Central with the city centre and the districts of Østerbro, Nørrebro, Vesterbro, and Frederiksberg.

The line runs underground for its entire length and will have 17 stations, constructed at depths of up to 35m. Two branches will extend metro services to Sydhavn and Nordhavn.

Civil works on the Cityringen are being carried out by the Copenhagen Metro Team consortium of Salini-Impreglio, Seli, and Tecnimont.