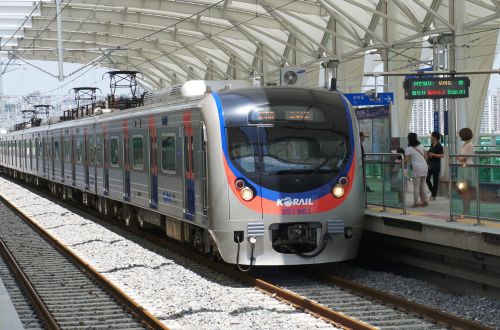 The line now connects with the Bundang Line, a commuter line which opened in 2003 and links north-eastern Seoul with Seongnam and Suwon. The entire route, now called the Suin-Bundang Line, is the third longest metro line in Korea at 108.1km after Seoul’s Line 1 and the Gyeongeui-Jungang Line.

The section from Oido to Hanyang University at Ansan Station uses the same tracks as the existing Ansan Line, the southern section of Seoul’s Line 4. This makes transfers between Line 4 and the Suin-Bundang Line more convenient as passengers can simply wait at the same platform and switch trains. In addition to this, the section links the Suin Line to the Seohae Line at Choji station, providing better transport links throughout Gyeonggi Province.

The Suin Line was a Won 2.74 trillion ($US 2.3bn) project which also saw a historic link between Incheon and Suwon re-established for the first time in 25 years. The line was originally a bumpy 762mm-gauge railway which opened in August 1937 and ran from Incheon Harbour to Suwon.

After South Korea gained independence from Japan in 1945 the line became largely unused before closing in 1995. Investigations into building a new line began as early as 1990, before the original line had even closed. Construction on the first phase finally began in 2004.

The first 13.1km section of the line was reinstated from Oido to Songdo in Incheon in June 2012. This was followed by the opening of the second 7.3km phase from Songdo to Incheon in February 2016, boosting patronage to an average of 35,000 passengers daily.

The newly completed final phase reduces travel times between Incheon and Suwon by metro from 1hr 30min to 1h 10min, with a total of 96 six-car trains operating across the entire Suin-Bundang Line each day.