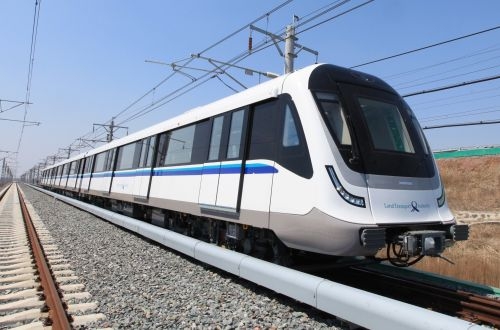 LTA awarded Bombardier a $US 571m contract in November 2008 for 219 of the driverless vehicles, and subsequently exercised an option in 2013 for 57 additional cars.

The 42km Downtown Line is Singapore's fifth metro line and construction is being implemented in three phases. The first 4.3km phase (DTL 1) from Chinatown to Bugis opened at the end of 2013 and the second 16.6km phase was inaugurated last December, extending services from Bugis to Bukit Panjang. The 21km DTL3 from Chinatown to Expo will be completed in 2017.

CBRV delivered 24 cars for the opening of DTL 1 and a further 111 vehicles were delivered in time for the launch of DTL 2. The 141 cars for DTL 3 will now be shipped to Singapore for on-site testing.

So far the C951 fleet has covered a total of 2.04 million km in operation on the first and second phases of the line.