THE first of 18 Alstom Metropolis trains for Guadalajara metro Line 3 was officially unveiled by Mexico’s secretary of state for transport and communications Mr Gerardo Ruiz Espara at a ceremony in the city on January 24. 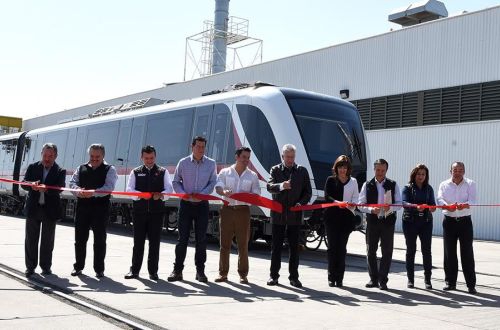 Mexico’s Federal Secretariat of Communications and Transport (SCT) awarded Alstom and CPVM, a subsidiary of OHL, Spain, a €380m contract in November 2014 to supply railway systems for the 21.5km line from Periférico Zapopan to Central Camionera. Alstom’s share of the contract is worth around €240m and includes rolling stock, signalling, electrification, and telecommunications.

The trains are being assembled at Alstom’s plant in Santa Perpetua de Mogoda, Spain.

Espara said during the ceremony that the Pesos 20bn ($US 936m) project is now 80% complete.