SIEMENS unveiled the first Inspiro metro train for Bangkok at its consortium partner Bozankaya’s factory in Ankara on June 19, the first of 22 new four-car sets for the Thai capital’s Green Line extension. 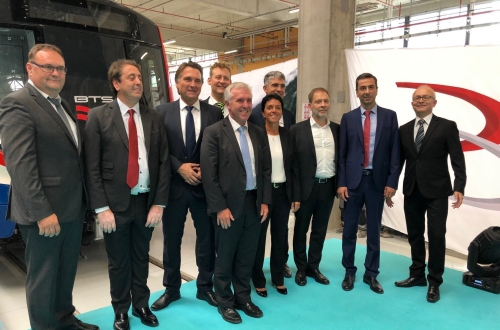 SIEMENS unveiled the train at its consortium partner Bozankaya’s factory in Ankara.

The 140 tonne metro train, which started productions in April 2017, will begin its journey from Ankara to the Turkish port of Borusan-Gemlik at the end of June, with the 15,000km journey to Bangkok taking about six weeks.

Arrival at the Thai port of Laem Chabang is scheduled for August 2018, and will be followed by static and dynamic commissioning including test runs on the Green Line tracks in Bangkok. The trains will operate on the existing BTS (Skytrain) system and its extensions, and will help boost the capacity of the lines to more than a million passengers a day.

Siemens’ scope for the Green Line extension trains includes the bogies, traction and braking systems, auxiliary systems, as well as the project management, design/engineering and commissioning of the trains.

These trains, which have a maximum speed of 80 km/h, accommodate 112 seats and 1460 standing capacity at crush load. Besides trains, Siemens is also delivering rail electrification system for the Green Line extension, and will also be responsible for maintaining the Inspiro fleet for 16 years.