THE first metro train for the Noida – Greater Noida Aqua Line left CRRC Nanjing Puzhen’s plant in China on November 2 on the first leg of its journey to India. 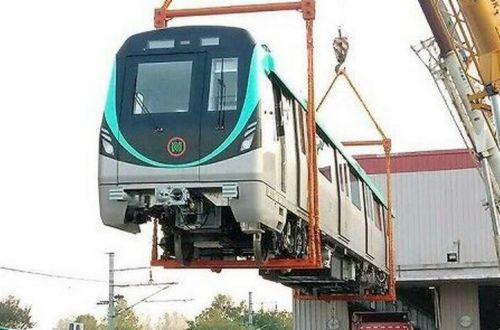 Trials are expected to begin shortly after the delivery of the first train to the Noida Metro Rail Corporation (NMRC) depot in the second week of December.

Scheduled to open in April 2018, the 29.7km line will serve 22 stations, including 13-at-grade, seven elevated and two underground stations. Trains will operate at a commercial speed of 35km/h with services running at 5-10-minute headways. The project has an overall budget of Rs 50.5bn ($US 775m).

CRRC Nanjing Puzhen was awarded a Rs 8.4bn ($US 121m) contract in March 2016 to supply 19 four-car trains, each capable of accommodating up to 1034 passengers. In the initial phase of operations, NMRC will require 11 trains to operate the timetable.
NMRC says it expects to receive trains at 15-day intervals from December onwards.

According to NMRC officials 98% of civil works have been completed, with only seven of the line’s 2500 girders still to be lifted.