THE first completed train for the Taichung MRT Green Line was officially presented to the deputy commissioner of Taipei City Department of Rapid Transit Systems (Dorts) in a ceremony at Kawasaki Heavy Industries’ (KHI) plant in Hyogo, Japan, on January 10. 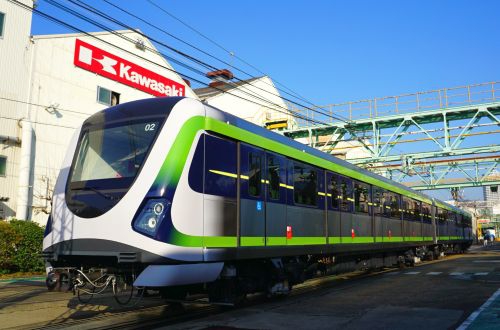 The fleet of 18 two-car driverless trains is being supplied as part of a $NT 10.9bn ($US 350m) contract for electrical and mechanical systems, which was awarded to a consortium of KHI, Alstom and CTCI Corporation, Taiwan, in April 2011. In addition to rolling stock, consortium leader KHI is responsible for project management and system integration. Alstom is providing signalling systems, while CTCI is responsible for power supplies, with the two companies working jointly on communications and fare collection systems.

The first train is due to arrive at the line’s Beitun depot in mid-February and the remaining 17 trains will be delivered to Taiwan by the end of the year.

The 16.7km Green Line (also known as the Wuri-Wenxin-Beitun Line) will link Xiajiushe with Xinwuri station on Taiwan Railway Administration’s Taichung Line. Commercial services are expected to start in December 2018.