Tunnelling now due to start from Valenzuela City. 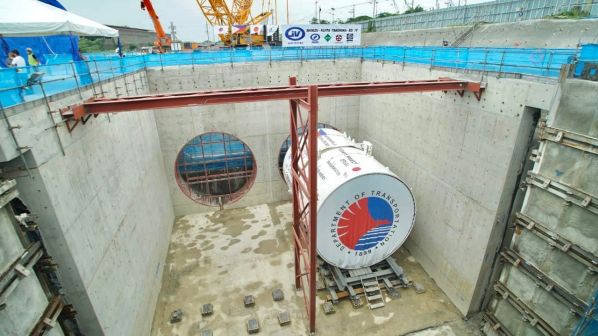 THE first tunnel boring machine (TBM) to be deployed on the Metro Manila Subway project has been lowered into position at Valenzuela City.

A total of 25 TBMs will be used to build the 33km metro line, running from Valenzuela City to Ninoy Aquino International Airport (NAIA) and serving a total of 17 stations.

According to the Department of Transportation (DoTr), the initial section of the first metro line in the Philippines is expected to open in 2025, with full operation to follow in 2027.

In its first year of full operation, the Metro Manila Subway is expected to be used by 370,000 passengers a day, but will have capacity for up to one million passengers a day as traffic grows over the coming decades.

DoTr secretary, Mr Arthur Tugade, says that the moving into position of the first TBM is “proof that the project is now becoming reality."

Addressing concerns that the project might come to a halt after the term of Philippine president, Mr Rodrigo Duterte ends, Tugade pointed to the finance being provided through Japan International Cooperation Agency (Jica), worth a total of Yen 357.5bn ($US 2.69bn), and the ongoing tendering and award of construction contracts.

“The funds needed for this project are already there,” says Tugade. “There is the funding arrangement and loan support of the government of Japan with the help of Jica.”

Tugade also pointed out that many projects during the previous administration were delayed by difficulties in obtaining the right of way. “Here on this project, more than 90% of the right of way is done,” he says.