THE first dynamic tests on Amsterdam's 9.8km North-South Line were made on April 21 using an M4 train from the Ring Line propelled by a shunting tractor. The tests took place at the northern end of the line between Noord and Noorderpark stations. 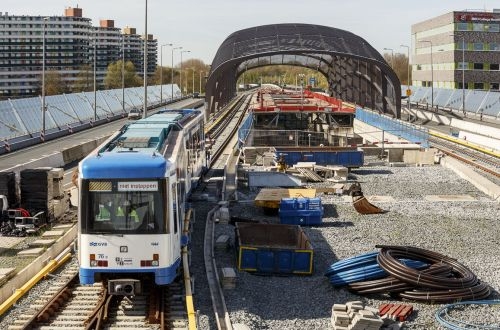 The objective of these initial trials is to test the functioning of the communications-based train control (CBTC) system supplied by Alstom. Further testing will be undertaken later in the year with an M5 train, by which time the third rail power supply will have been energised.

Construction of the North-South Line started in 2002. The northern section of the line is constructed at grade before diving beneath the IJ waterway to reach Amsterdam Central station where it will connect with the existing metro and Netherlands Railways (NS) mainline services. The line continues south beneath the historic city centre to reach South station, where it also connects with light rail, metro and NS services. The line is due to open in October 2017.