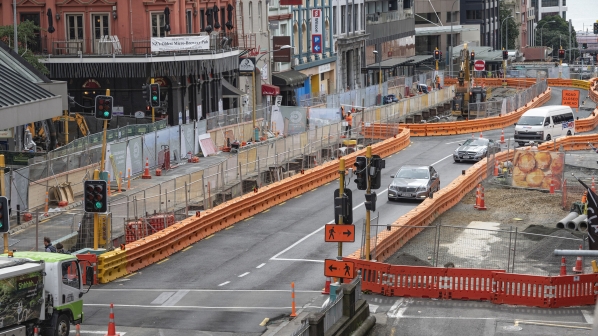 The JV constructed 350m of twin rail tunnels beneath Albert Street from Customs Street to Wyndham Street, as part of the project’s Package 2. The tunnel was built using the cut and cover method, with a 13m-wide trench that was up to 18m deep at its deepest point beneath the street.

The package also included the construction of a new storm water line from Swanson Street to Wellesley Street, the diversion and protection of numerous underground utilities and streetscape enhancement.

“Undertaking this type of work in the middle of Auckland’s city centre was very challenging, but the whole team rose to the task,” says Ms Marianne Rogers, Connectus senior project manager.

As well as building tunnels and an enhanced urban realm, Connectus had also worked with CRL Limited in its effort to build New Zealand’s largest transport infrastructure project without using unnecessary resources or creating unnecessary waste for both its design and construction.

The $NZ 4.4bn ($US 2.9bn) scheme involves construction of a 3.4km underground line beneath central Auckland, transforming Britomart into a through station. The line will have capacity for 54,000 passengers per hour.