Ivory Coast project is for 37km line with 18 stations. 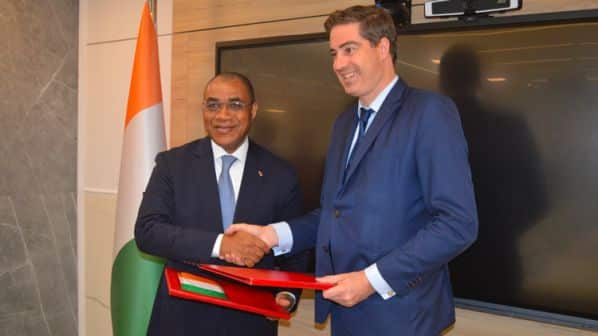 FRANCE has provided the government of the Ivory Coast with a loan of more than CFA Fr 164bn ($US 257.5m) for the Abidjan Metro project to help improve public transport in the port city.

Becht said the metro was a major project for Abidjan which would relieve traffic congestion while also providing residents with modern public transport.

Approval of a €1.36bn tender for constructing the 37kmAbidjan Metro submitted by the Abidjan Rail Transport Company (Star) joint venture saw the signing of a contract by Ivory Coast’s minister of transport, Mr Amadou Koné, in December 2019.

At that time construction of Phase 1, running from Anyama Centre in the north of the city to the southern suburb of Port-Bouët and Félix-Houphouët-Boigny International Airport, was expected to begin by the end of 2020. This was dependent on the government completing land acquisition and finalising a financing agreement with France.

The project was subsequently delayed by the Covid-19 crisis and other factors.

Following the end of l Korean involvement in the metro project, construction is now being mainly undertaken by French contractors. Bouygues Travaux Publics is the project manager, while Alstom will supply rolling stock, signalling, telecommunications, depot equipment and lead system integration. Bouygues subsidiary Colas Rail is responsible for the traction power supply and overhead electrification, along with track, ticketing and passenger information.

It is estimated that when the Abidjan Metro is completed it will be able to carry more than 540,000 passengers per day and will create 2000 jobs.