THE 1.3km southern extension of Hamburg U-Bahn Line U4 from HafenCity University to Elbe Bridges opened on December 6. 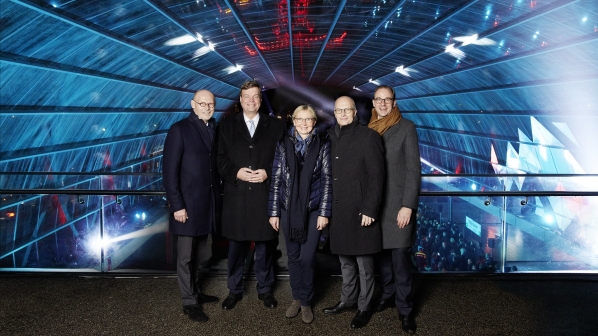 The line and station were opened by Mayor of the Free and Hanseatic City of Hamburg, Dr Peter Tschentscher, parliamentary state secretary in the Federal Ministry of Transport, Mr Enak Ferlemann, and Mr Henrik Falk, CEO of U-Bahn operator Hamburger Hochbahn.

Project participants were joined by around 200 guests from politics, businesses and the media for the maiden journey along the line.

Following the opening of the Elbbrücken station on the S3/S31 S-Bahn line, the two stations will be connected by a 9m-high “Skywalk,” providing an alternative route into the city centre and relieving pressure on Hamburg main station.

The line provides a connection to the growing HafenCity district, where the first skyscraper in Hamburg is due to be built within the next decade alongside apartments, offices and hotels. An estimated 18,000 passengers are expected to use the new line daily following the full development of the area.

The extension begins underground at HafenCity University before reaching the surface and curving into Elbbrücken station, which is aligned north-south to allow a future extension to the Kleine Grasbrook district.

The roof of the station, which is up to 16m-high, is made up of intersecting arched steel frames and glazed windows that are 136m-long and 32m-wide. The 1200 glass sheets each weighing 250kg produce a total weight of around 300 tonnes. Free rides were offered on the line for the first three days of operation, accompanied with a light show in the evening to highlight the station’s architecture.

The 4km section of U4 from Jungfernstieg to HafenCity University was opened in November 2012.