The new metro line in Hanoi runs from Cat Linh in the central Dong Da District to Yen Nghia in Ha Dong district. 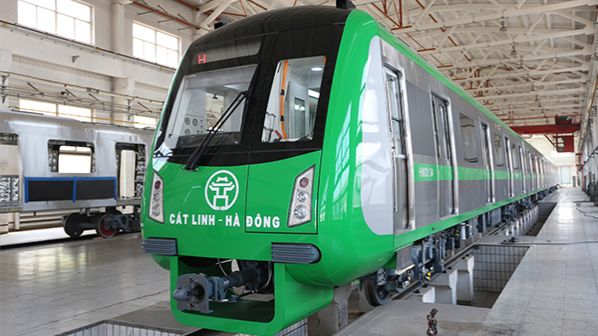 The line will be served by a fleet of 13 four-car trains.
Photo Credit: Beijing Subway Rolling Stock Equipment Company

The 13km elevated line, which has 12 stations, runs from Cat Linh in the central Dong Da District to Yen Nghia in Ha Dong district in the southwest with an end-to-end journey time of 23 minutes.

The line, dubbed 2A, is the first of 10 metro routes planned for the city that will total 417km, including 82% elevated and 8% underground. Line 3 from Nhon to Hanoi railway station, which will interchange with 2A at Cat Linh, is currently under construction.

Line 2A, built by China Railway Sixth Group, was approved in 2008 and was due to open in 2013 following a ground breaking ceremony on October 10 2011, but was delayed due to land acquisition difficulties, design changes and contractual conflicts. The total cost also increased by 57% from an original estimate of Dong 18 trillion ($US 791.6m), with 77% of this funded through official development assistance loans from China.

Services are initially operating at a 15-minute frequency between 05.30 and 20.00, with this due to be extended to 22.00 after six months when a six-minute frequency will be introduced during peak periods. Passengers can travel free of charge for the first 15 days after which they will cost Dong 8000 for an individual journey, Dong 30,000 for a day pass and Dong 200,000 for a monthly pass.

The line will be served by a fleet of 13 four-car trains supplied by Beijing Subway Rolling Stock Equipment Company. The trains have a design speed of 80km/h and capacity for more than 900 passengers. Hanoi Metro Company was formed in November 2014 to operate and maintain the line.