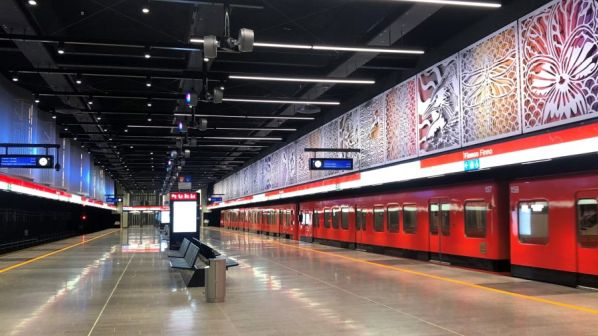 The opening takes to 43km the total length of the metro serving Helsinki and Espoo, its neighbour and Finland’s second-largest city. The Helsinki metro network now has 30 stations.

The first phase of the Länsimetro project was completed in 2017 with the opening of the section from Ruoholahti to Matinkylä with eight new stations.

Work continued west of Matinkylä towards Kivenlahti and was completed last month. The project is reported to have met all targets regarding construction schedule, cost, risk, quality and health and safety at work.

The completed extension from Ruoholahti to Kivenlathi is owned and operated by Länsimetro Oy. Train operations and maintenance are the responsibility of Kaupunkiliikenne Oy.

“We look forward to passengers being able to get to the new metro stations and enjoy the advantages of fast public transport.”

Preparations for opening the final section to Kivenlathi have included training 150 drivers and a programme of trial operation to test infrastructure and control room systems.

The extension will support development of the Länsimetro growth corridor, in line with the city of Espoo’s sustainable urban development policy to create five dense centres close to metro stations, surrounded by smaller houses.

New housing, services and employment opportunities are expected to follow, with a completely new residential area to be created at Finnoo. By 2050 the number of residents in Espoo is expected to increase by 70,000, accompanied by a 100% increase in the number of jobs.

“The Länsimetro growth corridor is also crucially important in terms of the competitiveness of Espoo and the whole of Finland,” says mayor of Espoo, Mr Jukka Mäkelä.

“The metro is now ready,” says Mr Mika Nykänen, CEO of Helsinki public transport authority HSL. “Decades of work is coming to an end, although metro development work will of course continue.”

“An environmentally-friendly metro has a revolutionary effect on the movement of people in its own area, and it is also very important for the vitality of the capital region and the whole of Finland,” Nykänen says.

Line 9 was extended from Pasila to Ilmala, where a new interchange has been provided between light rail and commuter rail services.

The extension forms part of the Helsinki light rail development programme adopted in 2015, improving route options in Ilmala and Pasila where recent growth has increased the demand for public transport.

Line 7 has been extended from Pasila station to Länsi-Pasila, running along Pasilanraitio and Pasilankatu to a new terminus at Maistraatintor.

For detailed data on light rail and metro projects around the world, subscribe to IRJ Pro.