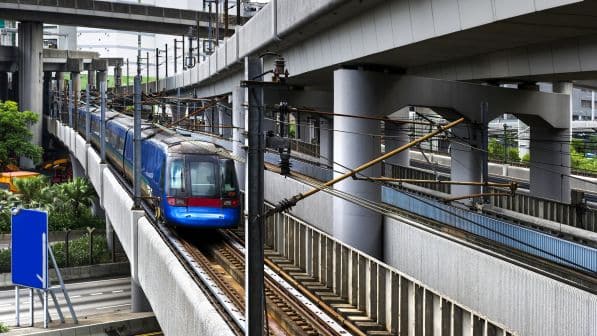 THE Hong Kong government is to prioritise the extension of MTR’s Tseung Kwan O Line southwards to TKO Area 137 among the major rail infrastructure projects announced by its recently-appointed chief executive, Mr John Lee, in his 2022 Policy Address.

Public consultation will be launched by December on the Tseung Kwan O Line Southern Extension, the Western Rail Link from Hong Kong to Shenzhen, and the Central Rail Link running from Kam Tin in Yuen Long to Kowloon Tong via Kwai Chung.

“We would like to see what residents think about those projects, because they know what is really needed, especially if they live nearby the new infrastructure sites,” says secretary for transport and logistics, Mr Lam Sai-hung.

“We will consolidate all the comments and release a blueprint by the end of next year revealing the routes and preliminary estimated budgets on each project, but we don’t have a timetable now.”

The Hong Kong government hopes to start work on the Southern Extension as soon as possible, in order to facilitate the development of a new residential area at TKO Area 137, expected to provide 50,000 new apartments from 2030 onwards.

However, Mr Gary Zhang Xinyu, deputy chairman of the Hong Kong Legislative Council’s Subcommittee on Railway Affairs, was not optimistic that the extension would be completed by 2030 because further land reclamation work might be required.

He argued that construction of the Central Rail Link should start as soon as possible to supplement the Northern Link from Kam Sheung Road station on the Tuen Ma Line to Kwu Tung station on the East Rail Line, which is due to open in 2027.

“Utilising the capacity of the Tuen Ma Line will not be enough by then. We can foresee people in the Northern Metropolis needing to travel more to Kowloon and Hong Kong Island, and there will be greater frequent transport needs.” he said.

Over the next 20 years, the government is planning to develop the Northern Metropolis as an economic and residential hub on 30,000ha of rural land in Yuen Long and North district near the border with China.

Welcoming Lee’s announcement, MTR said it was actively taking forward work on the Northern Link and the station at Hung Shui Kiu, as well as the Tung Chung Line Extension, Oyster Bay station and the Tuen Mun South Extension.

At the government’s prior invitation, MTR also been making progress with a construction study for the new Science Park/Pak Shek Kok Station on the East Rail Line, in order to assist development of the technology industry.

MTR is looking forward to any opportunity to participate in the Western Rail Link project running from Hung Shui Kiu to Qianhai in Shenzhen. In planning and designing Hung Shui Kiu station, the company says it will “thoroughly consider the interface and connectivity with the proposed new railway line to better facilitate citizens’ travel between Hong Kong and Shenzhen.”

“We welcome and support the local and cross-boundary railway projects and relevant land development plans presented in the 2022 Policy Address which will facilitate travel by the public and further promote the economic recovery of Hong Kong and the city’s sustainable development,” says MTR chairman, Dr Rex Auyeung.

“Providing reliable, efficient and environmentally-friendly railway services to the public, we are committed to delivering on our corporate purpose of `Keeping Hong Kong Moving’ and connecting and growing communities for the long-term sustainable development of Hong Kong.”