The extension will provide a fourth rail connection to Hong Kong Island. 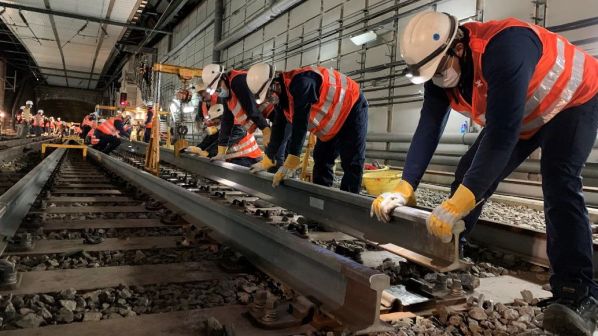 Switches and crossings have been installed north of Hung Hom Station to connect to the mainline.
Photo Credit: MTR Corporation

HONG Kong operator MTR has released a progress report for the remaining section of the under-construction Shatin - Central Link project, with the 6km East Rail Line (EAL) cross-harbour extension that will provide a fourth rail connection to Hong Kong Island due to open in June or July 2022.

MTR says critical works to connect the extension with the existing EAL have progressed well, with the mainline closed between Hung Hom and Mong Kok East over six Sundays to allow the installation of switches and crossings north of Hung Hom Station. The installation of signalling and the introduction of new trains has also progressed, along with works at Admiralty and Exhibition Centre stations.

Follow the completion of the connection between the two lines, full line dynamic train tests and reliability tests will be conducted. This will be followed by trial operations and eventually the commencement of passenger operation.

The EAL cross-harbour extension will provide a rail connection from Hung Hom Station to Admiralty Station, via the new Exhibition Centre Station at Wan Chai North, directly connecting the Northeast New Territories, Central Kowloon and Hong Kong Island. Together with the Tuen Ma Line, the final section of which opened in June, the extension will further enhance the connectivity of Hong Kong’s railway network and provide more transport options to the public.

“Thanks to the concerted efforts of the team in the past months, we have made substantial progress on the critical works for the project,” says MTR chief executive, Dr Jacob Kam. “As we enter the phase of full line testing and trial operations, tests and drills will be carried out for different operational scenarios and there may require additional time for fine-tuning of the systems and facilities or additional drills. Yet we will continue to work hard to ensure the remaining works and the upcoming testing and trial operations of the EAL cross-harbour extension proceed smoothly and fulfil the government’s rigorous requirements for safe and sound operation of the railway service, so that the EAL can extend its service across the Victoria Harbour as soon as practicable.