ROTTERDAM’s public transport operator RET held a public open day on September 28 ahead of a start-up operational phase for the Hook of Holland light metro line on September 30. 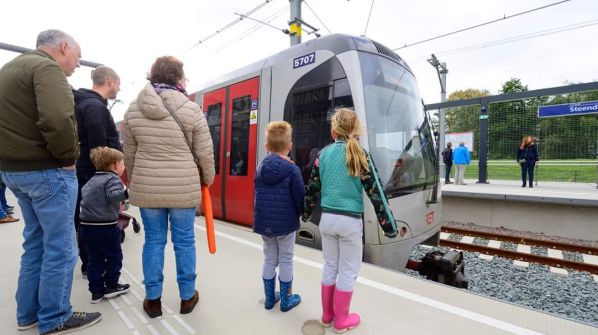 Passengers try out the light metro extension to Hook of Holland at Steendijkpolder station.

The light metro line will be integrated into the RandstadRail metro network. Initially, only Line B metro trains will run through to Hook of Holland with a scaled-back bus replacement service continuing as a back-up. Around one month later, peak-period Line A services will be extended to Hook of Holland allowing the back-up bus service to be withdrawn.

The Schiedam - Hook of Holland heavy rail line was closed for conversion to light metro operation in March 2017. The work was expected to take five months but ended up taking more than two years due to numerous problems such as the discovery of asbestos and polluted soil, construction difficulties, and safety software malfunctions. Reopening of the line was postponed six times, and one Rotterdam councillor was forced to resign. The project is also €90m over budget pushing the final cost to €462m.

A new station has been built at Steendijkpolder in Maasluis, and the line will be extended to Hook of Holland Strand in 2022. There is provision for freight trains to use the line to reach docks at Vlaardingen, part of the port of Rotterdam.

RET expects to carry 40% more passengers on the Hook of Holland line compared with the former heavy-rail service provided by Netherlands Railways (NS).

RET wants to build a new metro line from the Kralingse Zoom to the new Feijenoord City housing area, and then on to Zuidplein, Charlois and Rotterdam Central station. It would also like to convert two tracks of four heavy-rail tracks between Rotterdam Central and Dordrecht to metro operation. By adding extra stations and operating trains at two-minute interval RET expects to achieve a significant increase in traffic. Another ambition is to automate the metro to achieve 90-second headways.