A host of national and regional dignitaries gathered to inaugurate Lucknow’s first metro line on September 5 ahead of the official opening to the public on September 6. 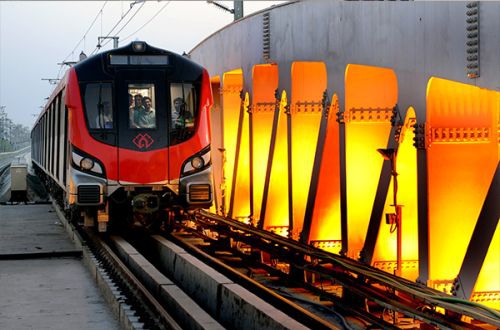 The 8.5km line from Transport Nagar to Charbagh has eight elevated stations and took nearly three-and-a-half years to build. Line trials, which included operating trains at the maximum line speed of 80km/h, got underway in December 2016 and were completed on August 14.

The line is fitted with Alstom’s Urbalis communications-based train control (CBTC) solution, which will enable operation at 100-second headways, and will initially be served by four-car Alstom Metropolis trains which will be operated entirely by women drivers. A fifth set will be left in reserve with trains operating initially at seven-minute headways.

Services will operate from 06.00-22.00 every day and fares, which will be determined on the number of metro stations travelled, will vary from Rs 10 ($US 0.16) to Rs 60. Use of GoSmart smartcard ticketing will offer passengers a 10% discount.

Lucknow Metro Rail Corporation, which is operating the line, purchased a fleet of 20 trains from Alstom under a €150m contract signed in September 2015. The trains were designed in Bengaluru and manufactured at Sri City and Coimbatore, supporting the government’s ‘Make in India’ campaign.