INDIA’s prime minister Mr Narendra Modi and the chief minister of Telengana state Mr K Chandrashekhar Rao made an inaugural trip on November 28 to mark the completion of the first 30km section of the Hyderabad metro linking Miyapur with Nagole. 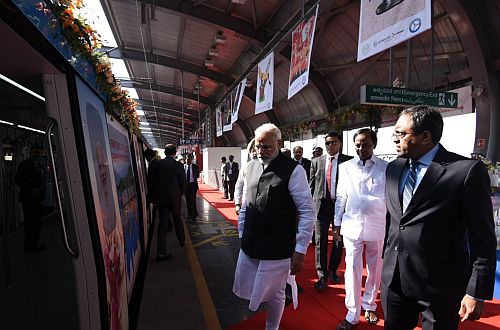 The first section comprises a 13km section of the Red Line from Miyapur to Ameerpet which is connected to a 17km section of the Blue Line from there to Nagole. With an expected daily ridership of 1.6 million passengers, the concessionaire, L&T Metro Rail Hyderabad, has decided to run three-car trains initially. Trains will be extended to six cars at a later stage.

L&T has been set a June 2018 deadline to complete construction of the elevated standard-gauge metro with all three lines totalling 169km targeted to begin operation by December 2018.

The Rs 159.6bn ($US 2.5bn) project is being built as a Public Private Partnership (PPP). L&T is responsible for construction, operation and maintenance of the project and is bearing most of the cost, with the Indian government responsible for the remaining 10%.

The project was conceived in 2007 and the state government firmed up a deal with Maytas Infra, with Navbharat Ventures, IL&FS and Ital Thai as consortium partners, in September 2008. However, the agreement was cancelled in July 2009 after Satyam Computers, the parent company of the Maytas Infra, became embroiled in a major financial scam. The project was revived in November 2012, after the entry of the Larsen and Toubro as a project partner.