INDIAN prime minister Mr Narendra Modi officially opened the initial section of Delhi’s metro Magenta Line (Line 8) on December 25, when he took an inaugural trip on the 16.6km, nine-station section between Botanical Garden station in Noida and an interchange with the Violet Line at Kalkaji Mandir. 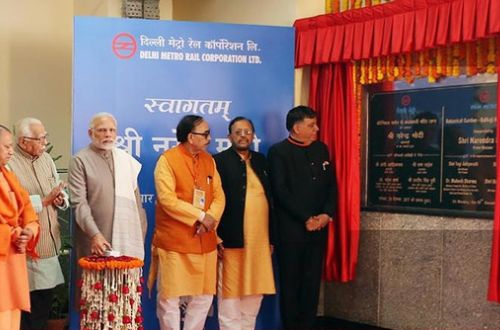 The standard-gauge line is the first on the Delhi metro network to be equipped with CBTC, employing the Simple-structure and high-Performance ATC by Radio Communication (Sparcs) system supplied by Nippon Signal, Japan. It is only the second line to be equipped with platform screen doors (after the Airport Express Line).

Services are operated by a fleet of six-car Hyundai Rotem RS-10 trains. These feature 3.2m-wide bodyshells to optimise capacity.

Unattended Train Operation (UTO) is expected to begin in 2019, enabling trains to run at 90-second headways.

The 38.2km line will follow the outer ring road south of the city from Janakpuri West to Hauz Khas, Kalindj Kunj, and an interchange with the Blue Line at Botanical Garden. Line 8 will have 25 stations, 15 of them underground, and 19km of the route will be elevated or at grade with 17.3km in tunnels.