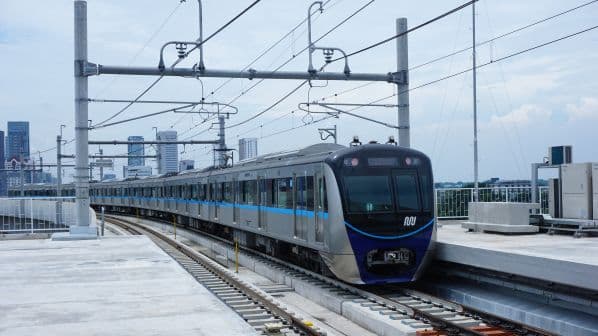 THE government of Indonesia signed three separate agreements covering the development of the Jakarta Mass Rapid Transit (MRT) network during the G20 summit held in Bali this week.

The MRT network is expected to reach 235km by 2035, as Indonesia works to reduce congestion and improve air quality in the densely-populated Greater Jakarta region.

The next stage of the MRT programme includes Phase 3, known as the East-West Line, which will run for 87km and serve 40 stations.

Indonesia has signed a Memorandum of Cooperation (MoC) with the government of Japan concerning the construction of the East-West Line from Kalideres to Ujung Menteng. The MoC was signed by Japan’s deputy minister for foreign cooperation, Mr Satoru Mizushima.

Britain’s ambassador to Indonesia and Timor Leste, Mr Owen Jenkins, signed a letter of intent which will see the governments of both countries cooperate on rolling stock development.

The third agreement is a Memorandum of Understanding (MoU) signed by Indonesia and Korea on the construction of the Phase 4 route from Fatmawati to Kampung Rambutan.

“Today, Jakarta is seen as a city that is quite representative for the pilot development of urban mass transportation,” said Indonesia’s minister of transportation, Mr Budi Karya Sumadi.

He stressed the importance of establishing partnerships with other countries for infrastructure development at a time of domestic budgetary constraints.

The signing of the agreements was welcomed by Mr Tuhiyat, president director of MRT Jakarta which is the developer and operator of the MRT network.

He expressed his “deepest gratitude” to the Indonesian government and Jakarta province “for their full support in the development of MRT Jakarta."

Jakarta’s acting governor, Mr Heru Budi Hartono, said: “I hope that this MRT development project can be implemented well and on time so that it can ease travel for people in Jakarta.”

This would encourage more people to use public transport instead of the private car, he added, helping to support a more sustainable environment.