IRELAND’s National Transport Authority (NTA) and Transport Infrastructure Ireland (TII) have announced details of a preferred route for MetroLink, a €3bn largely underground metro line for Dublin, which will provide a rail connection to the city’s international airport for the first time. 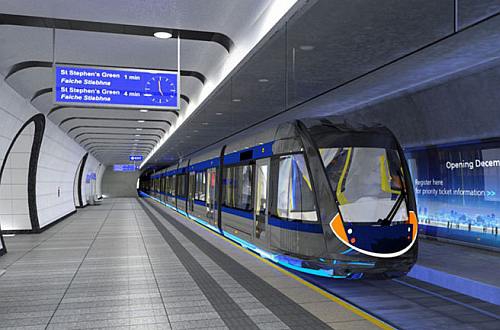 The proposed 26km route will run from Estuary, north of Swords in the north of the city to Sandyford in the south, via the airport and the city centre. The line will include a 12km underground section, beginning at Fostertown and running beneath the airport and continuing to Charlemont via a new main line railway station to the west of Cross Guns Bridge and the city centre. The line will then join the existing Luas Green Line alignment to Sandyford, which will be upgraded for metro operation as part of the project.

The line will have 25 stations, 15 of which will be new metro stations, and is forecast to carry 15,000 passengers per hour per direction at peak times when it opens in 2027. The line is expected to operate 30 trains per hour in each direction and use trains of more than 60m in length while the project is anticipated to create 4000 jobs during construction.

“We don’t believe that a bus system or a standard Luas line would be able to accommodate that number of passengers and that is why MetroLink makes so much sense,” says Ms Anne Graham, NTA CEO.

The new proposal combines the previous Metro North and Metro South elements of the National Development Plan 2018-2027 into MetroLink as a single project. Consultation on the project will commence this week with a series of information events for communities along the proposed route. Construction is expected to begin in 2021 ahead of the start of operations in 2027.

“What we are publishing here is the Emerging Preferred Route (EPR), rather than the final route,” says Mr Michael Nolan, TII CEO. “Having examined in detail the various alignments and options, the EPR is the one we feel is the best fit for the project. But we remain open to looking at other proposals and if people or communities feel there are better ways of doing it, we will of course be happy to consider any alternatives put forward.”

For the latest information on metro projects from around the world, subscribe to IRJ Pro.