TURKEY’s president, Mr Recep Erdoğan, vice-president, Mr Fuat Oktay, and the mayor of Istanbul, Mr Melvüt Uysa, attended a ceremony on the Asian side of Istanbul on October 21 to mark the inauguration of the second phase of Line M5, the city’s first driverless metro line. 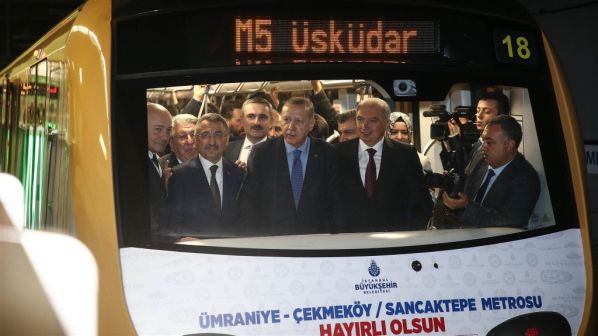 Phase 2 extends Line M5 9.2km from Yamanevler to Çekmekköy and adds seven stations to the Istanbul metro network, including an interchange with the future Line M8 at Dudullu.

The extension has capacity to carry 65,000 passenger per hour per direction and is expected to eliminate 15,424 daily vehicle trips from the city’s streets.

A consortium of Mitsubishi Corporation and CAF has supplied 21 six-car trains for Line M5 under a €119m contract awarded in June 2014.

The opening of Line 5 Phase 2 takes the total length of the Istanbul metro network to 170km with 169 stations.

The initial 10.5km phase of Line M5 opened in December 2017, connecting an interchange with the trans-Bosporus Marmaray link at Üsküdar with Yamanevler.