INDONESIAN president Mr Joko Widodo and the governor of Jakarta Mr Basuki Tjahaja descended beneath the streets of the capital on February 23 to mark the completion of tunnelling for the first phase of the city’s MRT project. 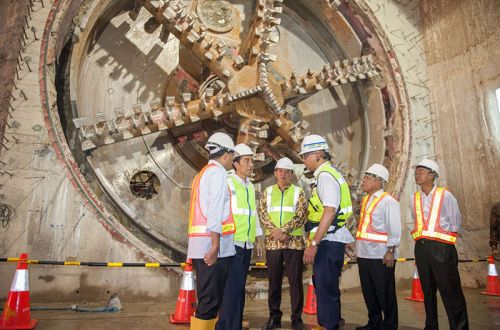 The 15.7km link from Lebak Bulus in south Jakarta to Hotel Indonesia traffic circle in the city centre is due to open in March 2019 and includes a 5.7km twin-bore tunnel between Senayan and Hotel Indonesia. Six of the line’s 13 stations will be underground.

Construction on the 1067mm-gauge line, which will be electrified at 1.5kV dc began in October 2013 and the first of four TBMs began tunnelling in September 2015.

The line is forecast to carry 173,400 passengers per day and services will be operated by a fleet of 16 six-car trains, which are being supplied by Nippon Sharyo. Services will initially operate at five-minute headways with a journey time of 30 minutes between the terminus stations.

Construction of the 13.5km second phase from Hotel Indonesia to Ancol Timur is due to begin in 2019 with opening scheduled for 2021.