The metro and other public transport operators in Ukraine have also been invited to become members of the International Association of Public Transport (UITP). 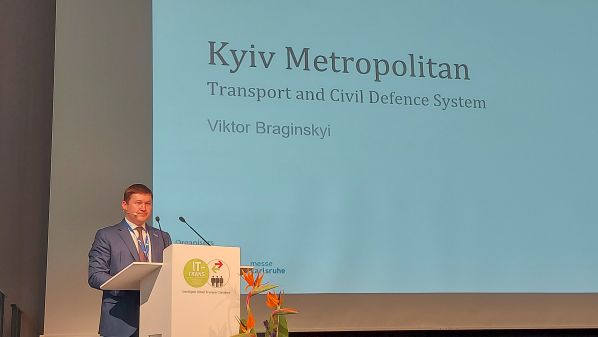 IRJ at IT-Trans: Metro Kyiv has been admitted as a member of the International Association of Public Transport (UITP), after the CEO of Metro Kyiv, Mr Viktor Braginsky, gave a speech on the situation during the Russian invasion at IT-Trans in Karlsruhe, Germany, on May 10.

Speaking through a translator, Braginsky praised the role UITP members have played in supporting the metro, and called for additional help as the operator looks to reduce its reliance on Russia.

“The main task that we’re facing is changing the equipment according to the European standards, 80% of our equipment is Russian and we need to switch to European,” he says. “We need partners to deliver spare parts to substitute the Russian components and our expertise. It would be a pleasure to get to know you and to set up a collaboration.”

The change to European standards began in 2014 following Russia’s annexation of Crimea, with 135 trains modernised so far, but Braginsky said this had been accelerated following the invasion of Ukraine.

Braginsky also outlined the role the metro is playing as a shelter for around 20,000 residents, some of whom have moved into the underground stations as they fear for their safety.

The network opened in 1960 during the Cold War, when Ukraine was part of the Soviet Union, and features some of the deepest stations in the world, which are designed to withstand nuclear and biological attacks, with capacity for up to 100,000 people.

“We would never think that we would need to implement that second [wartime] function,” Braginsky says.

Services were reduced to just one train per hour in the early days of the invasion, as many staff members were unable to travel to work from their homes on the outskirts of Kyiv. Some are now effectively living in the metro stations, with service frequencies now increasing to 10 to 15 minutes across much of the network.

As well as providing basic needs such as food for those residing in the stations, Kyiv Metro also recognises the need to keep people occupied and entertained, with volunteers organising film showings and band performances.

Braginsky received a standing ovation following his speech before being presented with a certificate to confirm the metro’s UITP membership. UITP secretary general, Mr Mohamed Mezghani, then outlined the steps the association has taken following the invasion, including suspending the involvement of all Russian and Belarusian members in UITP activities until further notice. Association members from Russia are also no longer able to participate in UITP committees, platforms and working bodies or benefit from the association’s services. Representatives from Russian members who sit on UITP boards have also stepped down from their current positions during this period.

The association also launched a “spare parts for Ukraine” campaign on May 9, as several authorities and operators are in need of spare parts to keep their networks operational. A list of the parts needed and the contact details of the operators is available here.