THE Los Angeles County Metropolitan Transportation Authority (LACMTA) board of directors has awarded a $US 1.37bn contract to the joint venture of Tutor Perini and O&G to construct the 4.2km second section of its Purple Line extension project. 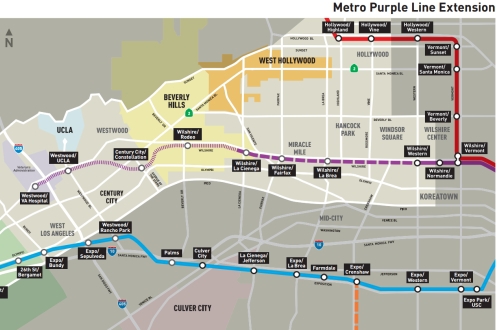 The extension will continue the Purple Line to Century City, and Wilshire/Rodeo in Beverley Hills, and the board has set a project budget of $US 2.4bn.

LACMTA says the joint venture’s proposal was competitive, being about $US 500m less than competing offers. The transportation authority previously recommended the Tutor Perini and O&G joint venture for the project’s second phase on January 17.

The authority says it carried out an extensive competitive bidding process which deemed the Tutor Perini team’s proposal as the best offer overall due to its technical, project management and cost aspects.

The Tutor Perini and O&G team and its subcontractors have previously completed notable metro tunnel projects for the Central Metro project in San Francisco, the University Link in Seattle and New York's East Side Access project, in addition to helping to build the World Trade Centre's Greenwich Street Corridor for the Port Authority of New York and New Jersey.

The second metro section is set for completion by 2026 as outlined in a funding agreement with the Federal Transit Administration. The US Department of Transportation announced $US 1.6bn in federal funding in early January to support LACMTA’s efforts to bring the Purple Line’s second section to fruition.

Tutor Perini also participated in the construction of LACMTA’s original Red Line. The contractor built its second and third sections, completing the third segment six months earlier than expected while remaining within the allotted project budget.

For detailed data on the latest rail projects around the world, subscribe to IRJ Pro.