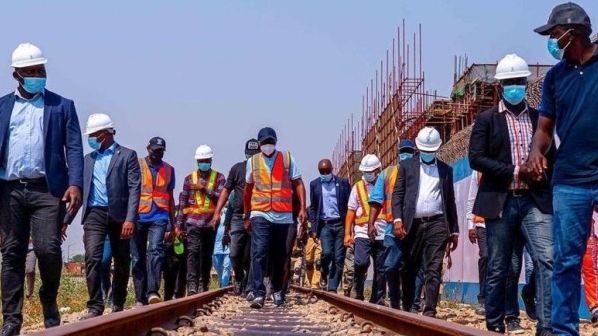 LAGOS state governor, Mr Babajide Sanwo-Olu, has announced that the 37km Lagos Rail Mass Transit (LRMT) Red Line is due to open on schedule in the first quarter of 2023, with construction of the line in Nigeria’s largest city now in the final phase.

The project is being implemented by the Lagos Metropolitan Area Transport Authority (LAMATA) and the line will have capacity for more than 500,000 passengers a day. The first phase of the standard gauge line will run from Agbado to Oyingbo with eight stations, and will reduce travel times by two hours. A planned second phase will extend the line to Iddo, adding another three stations.

Sanwo-Olu announced the completion target during a four-hour visit to the line on August 6, when he inspected the multi-level Agege station. The station is located 300m away from the Babatunde Raji Fashola main line station with which it shares a yard.

Sanwo-Olu also inspected Ikeja station, which is 80% complete, and Mushin station where an overpass has been built to connect Kayode and Ogunmokun streets.

“The civil work has been completed, it’s just the finishing job we are doing at the moment,” Sanwo-Olu says. “All the activities are on schedule and we are hoping the entire project will be completed by the end of the year. There are places that were particularly challenging for the contractor to do drilling due to high vehicular density. All the challenges have been overcome; what is left is concrete in-situ and placing of precast beams.”

The LRMT is a proposed rail network comprising six major corridors and a monorail within and beyond metropolitan Lagos, extending to the border with Ogun state. The LRMT lines are planned to serve priority and high commuter demand corridors.

Construction is still underway on the 27km Blue Line, which will have 13 stations between Marina and Okokomaiko. Construction began in 2010 with a target completion date of 2016.