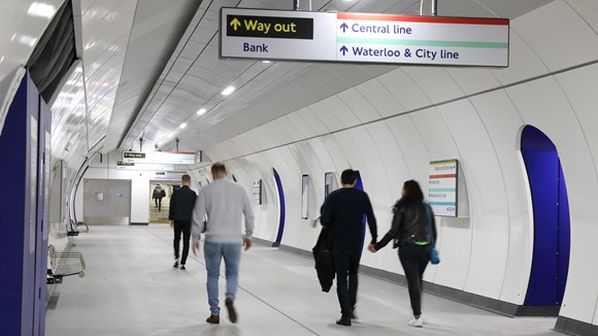 The upgrade has included better connections between LU lines at Bank.
Photo Credit: Transport for London.

LONDON Underground resumed operations between Kennington and Moorgate on the Northern Line on May 16, following a 17-week closure to carry works out at Bank station under a £700m programme to increase capacity by 40%.

A new, wider southbound platform has been built at Bank as well as a more spacious concourse and three passageways to improve interchange with the Central Line and the Docklands Light Railway (DLR).

The Bank capacity upgrade is due to finish later this year, with the remaining phases of the project including providing step-free access to the Northern Line and improving access to the DLR platforms.

Two new moving walkways will be installed to connect the Northern and Central lines, as well as 12 new escalators and two new lifts.

“The Northern Line has fully reopened to customers, on schedule and to budget, after the successful completion of the latest phase of vital upgrade works at Bank station,” says mayor of London, Mr Sadiq Khan.

“From today, Northern Line customers at Bank station are able to use a new, 5m wide southbound platform and spacious concourse,” says Mr Stuart Harvey, chief capital officer at Transport for London (TfL). “The old layout was very constrained, leading to frequent congestion, but Northern Line customers will now be able to make their journeys much more quickly and easily.

“The countdown is now on for finishing the rest of this complex major upgrade later this year, transforming Bank into a modern, flagship station, fit to serve one of the world’s most important financial districts.”

Separately, on May 13 British regulator the Office of Rail and Road (ORR) announced that it had issued the final safety approvals for the 21km central London section of the Elizabeth Line, enabling the route between Paddington and Abbey Wood to open on May 24 as previously announced.

The ORR has confirmed that all infrastructure and stations meet the requirements for passenger use, with the exception of Bond Street which has been authorised for safe evacuation procedures only.

Work is continuing at Bond Street station which is due to open to passengers later than the rest of the central section between Paddington and Abbey Wood.

For information on British infrastructure projects, subscribe to IRJ Pro.

An interview with London Underground managing director Mr Andy Lord was published in the January edition of IRJ.