SINGAPORE’s Land Transit Authority (LTA) says it is making good progress with renewal of the six core systems on the North-South and East-West lines, completing sleeper and third-rail replacement work and resignalling on the lines by the end of 2019. 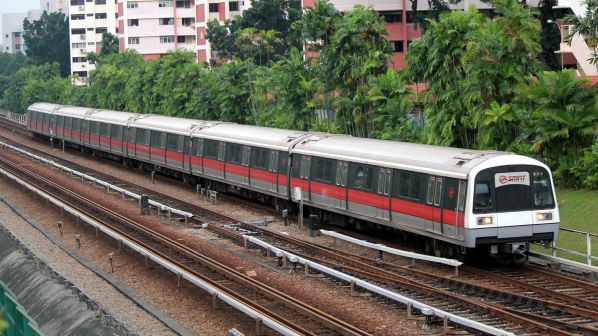 The new Bombardier trains will replace the C151 trains which date from 1987.

LTA says these improvements have already contributed to improve system reliability. From October 2018 to September 2019, the North-South Line increased its distance before failure to 1.43 million train-km from 894,000 train-km in 2018. Similarly, the East-West Line fleet rate increased from 408,000 train-km to 1.045 million train-km during the same period.

LTA says the remaining three renewal projects - renewal of the power supply system, replacement of track circuits, and replacing 66 first-generation trains used on the lines - will be completed in the early 2020s.

As of December 2019, more than 110km of power cables have been installed, while the 64P touch voltage protection system located within the NSEWL stations have all been replaced with new Voltage Limiting Devices (VLD). The new VLDs can help to isolate the impact of power faults and prevent these from causing a line-wide disruption to rail operations. In addition, around 50% of dc switchgear has been replaced with the remainder expected to be completed by the fourth quarter of 2020. The high-voltage system comprising 22kV switchgear, transformers, rectifiers and inverters in nine stations has been replaced, with another 12 stations due to be completed by the first half of 2020.

The new power supply system will include new features to support real-time condition monitoring, improving fault detection and offer a prediction capability which will enable the operator to conduct early intervention works.

Around a quarter of the work to renew track circuits has been completed so far including the section between Bukit Batok and Khatin on the North-South Line. The new track circuits will automatically detect broken rails and speed up service recovery following a track circuit fault. The replacement works are expected to be completed around 2022.

LTA selected Bombardier to supply 66 new six-car Movia metro trains under a $S 827m ($US 613m) contract awarded in July 2018. Manufacturing of the vehicles is underway and delivery is on course to commence in 2021.

The new trains will feature condition monitoring and diagnostics systems for fault detection and to track the real-time performance of various systems. The interiors are designed to improve accessibility for passengers in wheelchairs and people using strollers.