MADRID Metro announced on April 23 it will rename one of its lines Line 2 Vodafone and the city's most central station Vodafone-Sol after reaching a three-year €3m agreement with the mobile telephone company. 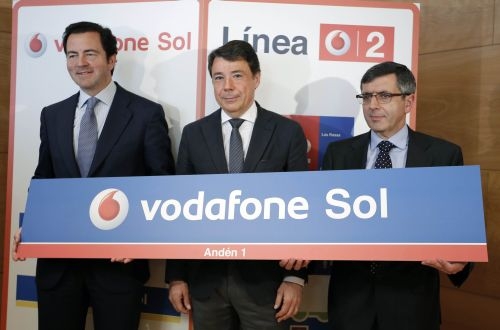 Under the agreement all the signs and maps displayed in 272 stations and onboard 2311 cars will be reprinted to include the Vodafone logo alongside the Line 2 and Sol names. Recorded announcements will also be modified to include the new names. The agreement will also allow Vodafone to undertake unspecified commercial actions in any of the stations on Line 2.

With this move, Madrid Metro will increase its annual advertising income by 10%. This is part of a series of measures to increase income and reduce operating costs. Fares were increased by 11% last year, while the total budget for the 2013 financial year was cut by €20m to €955m, leading to the closure of dozens of station entrances, a reduction in escalator and lift maintenance, and a 50% cut in train frequency after 23.00.

The regional president, Mr Ignacio González, praised the move saying: "Naming rights are an enormous source of income for the metro. We have another 11 lines and many more stations to offer." González made it clear, though, that "this new income would not avoid fare increases in the future."