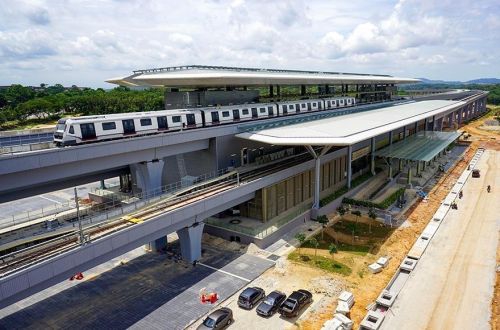 Passenger services began on December 16 on the 21km northern section of the line from Sungai Buloh to Semantan, which runs on an elevated alignment and includes 12 stations. Free travel is being offered for the first month of operation.

Services will operate at 3.5-minute intervals and the 31-station line is expected to carry around 445,000 passengers per day when both phases are operational, bringing 1.2 million residents of the city within reach of the transit network.

Services on the new line are operated by a fleet of 58 four-car Inspiro driverless (GoA 4) trains, which have been supplied by the SSSC consortium of Siemens Malaysia, Siemens AG and SMH Rail under a contract awarded in October 2012. Each 89.6m-long train accommodates up to 1554 passengers (at 8 passengers/m2), 174 of them seated.

Car bodies for the trains were produced in China by CRRC Puzhen, with SMH carrying out final assembly at its plant in Rasa, Malaysia.

With a final pricetag of Ringgits 21bn ($US 4.59bn) for the two phases, the project has been delivered with around Ringgits 2bn to spare from the government’s original budget.

At the inauguration ceremony, Mass Rapid Transit Corporation of Malaysia was awarded ISO 9001:2015 certification, making it the first railway construction or development-related organisation in Malaysia to achieve this standard.