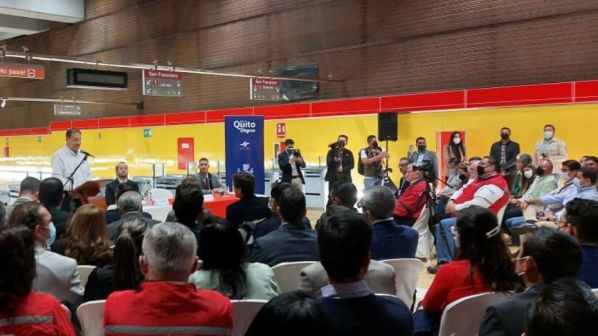 THE consortium of Metro Medellín of Colombia and Transdev has been selected by Quito Metro Metropolitan Public Company (EPMMQ) to operate the 22.5km metro in the capital of Ecuador, due to open in December.

The six-year operating contract is due to be signed at the end of August, in order for rolling stock testing and trial operations to begin in October.

CAF has supplied a fleet of 18 six-car trains for the new route.

The process to award the operating contract began in March when operators from around the world were invited to express their interest. EPMMQ received two bids by the deadline of June 22, which were then evaluated against technical and legal criteria as well as the price of the bid.

EPMMQ general manager, Mr Efraín Bastidas, says that the selection of the preferred bidder is “an historic milestone” for the Quito Metro project which has been under development for 12 years. “For the first time we have a preferred bidder,” Bastidas says.

“This is a very important day for the city and for the three million inhabitants of the metropolitan district,” says mayor of Quito, Mr Santiago Guarderas.