MILAN celebrated the opening of five stations on the 7.4km east-west extension of Line 5 on April 29, just two days before the inauguration of Expo 2015. 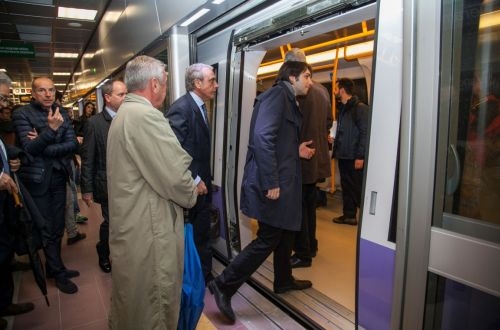 The new stations are: Domodossola FNM, Lotto, Segesta, San Siro Ippodromo and San Siro Stadio. The remaining five stations on the extension - Monumentale, Cenisio, Gerusalemme, The Torri, and Portello - will open in October.

The 12.8km line is Milan first driverless system and is equipped with a communications-based train control (CBTC) system supplied by Ansaldo STS which enables service frequency to be adapted at short notice to meet demand. Stations platforms are 50m long and fitted with platform screen doors.

The project was initiated in 1999 and following delays, the first section, the 4km stretch from Bignami to Zara opened in February 2013 and this was followed by the 1.4km Zara - Garibaldi extension in March 2014. Ansaldo Breda supplied the trains for the line, with 19 operating along the line at three minute frequencies in the peak and four minutes at other times and offering a total journey time of 30 minutes.

The line is expected to serve 55,000 daily passengers with each four car train having capacity for up to 536 passengers, 72 of which are seated with two areas available for disabled passengers.