MINSK Metro has opened the first section of the cross-city Line 3 on November 6, following an inauguration attended by Belarusian president, Mr Alexander Lukashenka, with full operation beginning the next day. 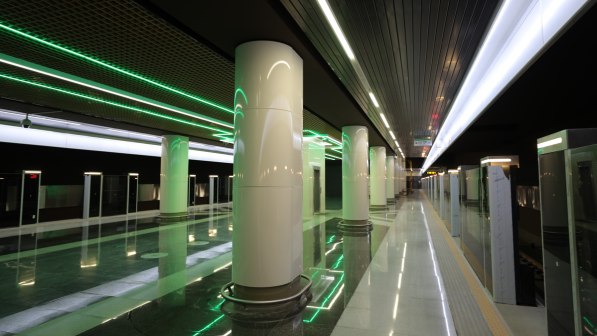 The new 3.5km north-south line has four stations and interchanges with Line 1 at Vakzal’naja and Line 2 at Yubileynaya Ploshcha. Construction on the line began in February 2014.

Two extensions are planned, giving Line 3 a total length of 17km when completed. Construction of the southern extension to Slutsky Gostinets is underway, and is scheduled to open in 2023. Work on the northern extension to the Zialiony Łuh district is due to begin in 2023-24, with the full line scheduled to be completed by 2028. Other shorter extensions to the existing two lines are proposed.

Lukashenka also announced his support for the creation of a fourth ring line that would connect with the other three lines, planning for which is underway.

The line will initially be operated by a fleet of six four-car M110/M111 EMUs, which were manufactured by Stadler at Fanipal, southwest of Minsk under a contract signed in 2017 and delivered in 2019. A further four five-car trains delivered in 2020, currently being used to operate services on other parts of the network, will be introduced to Line 3 at a later date.

For detailed data on metro lines around the world, subscribe to IRJ Pro.